In acute settings, specifically in the emergency department, physicians often encounter patients with chief complaints of unilateral weakness or hemiparesis. Although imaging studies and traditional physical findings are in most cases consistent with stroke or neoplastic processes, in some cases the origin of such neurological symptoms remain unknown. Here we discuss the specificity and reliability of a few physical tests that differentiate between organic and nonorganic causes of neurological symptoms such as the Hoover sign.

Organic neurological disorders are defined as symptoms caused by vascular processes such as ischemia, hemorrhage or cancer in the central nervous system, and nonorganic causes of neurologic symptoms are mainly due to functional neurologic disorders (conversion disorder, hysteria, etc.).  Nonorganic instances account for up to 9% of admissions to a neurologic service and 30% of outpatient referrals to neurologists. Of the many proposed findings of nonorganic neurologic disease, the most prominent are findings whose severity fluctuates during examination1,2. These findings mainly defy neuroanatomic explanation, and present with bizarre movements not normally seen in organic diseases such as hysterical hemianopia, wrong-way tongue deviation, peripheral facial palsy and ipsilateral hemiparesis. Other cases such as patients who drag their hemiparetic leg after themselves as if it were an inanimate object, or the ataxic patient who sways dramatically without falling3.

In some instances, physicians recommend the conventional therapies such as tPA for stroke, as long as the Head CT is negative for bleeding and the patient or their family members report that the last time patient was seen normal was less the 4 hours.

Despite complexity, having a sufficient understanding of a few physical tests in order to  sort out these cases and differentiate between organic and nonorganic causes is paramount1.

There are a few observation skills and tests that could help in differentiation between organic vs. Nonorganic causes:

1-Findings that defy neuroanatomic explanation: a) Hysterical hemianopia: seen in the patients who have right hemianopia with both eyes open or just the right eye open but normal visual fields when just the left eye is open. b) Wrong-way tongue deviation: these patients have a deviated tongue away from the hemiparetic side and as we know in hemispheric strokes or lesions, tongue deviates contralateral to the lesion. c) Peripheral facial palsy and ipsilateral hemiparesis: if a single lesion causes peripheral facial weakness and hemiparesis, the lesion is in the brainstem and the siding should be on opposite side of the body2,4.

2- Findings elicited during special tests: a) Optokinetic nystagmus for functional blindness; because patients with intact vision cannot suppress this nystagmus. The presence of optokinetic nystagmus indicates that the blindness is functional. b) procedures that confuse the patient of sidedness: such as a maneuver that mixes up the fingers to uncover hysterical hemianalgesia. c) The Hoover sign of nonorganic weakness (watch the video): physical stands at the foot of the bed and asks the patient to flex the hip of the unaffected lower extremity against resistance while holding the affected heel. A patient with hemiparesis from organic origins such as stroke will not exert pressure on the physician’s hand placed under the heel of the unaffected foot2-5. 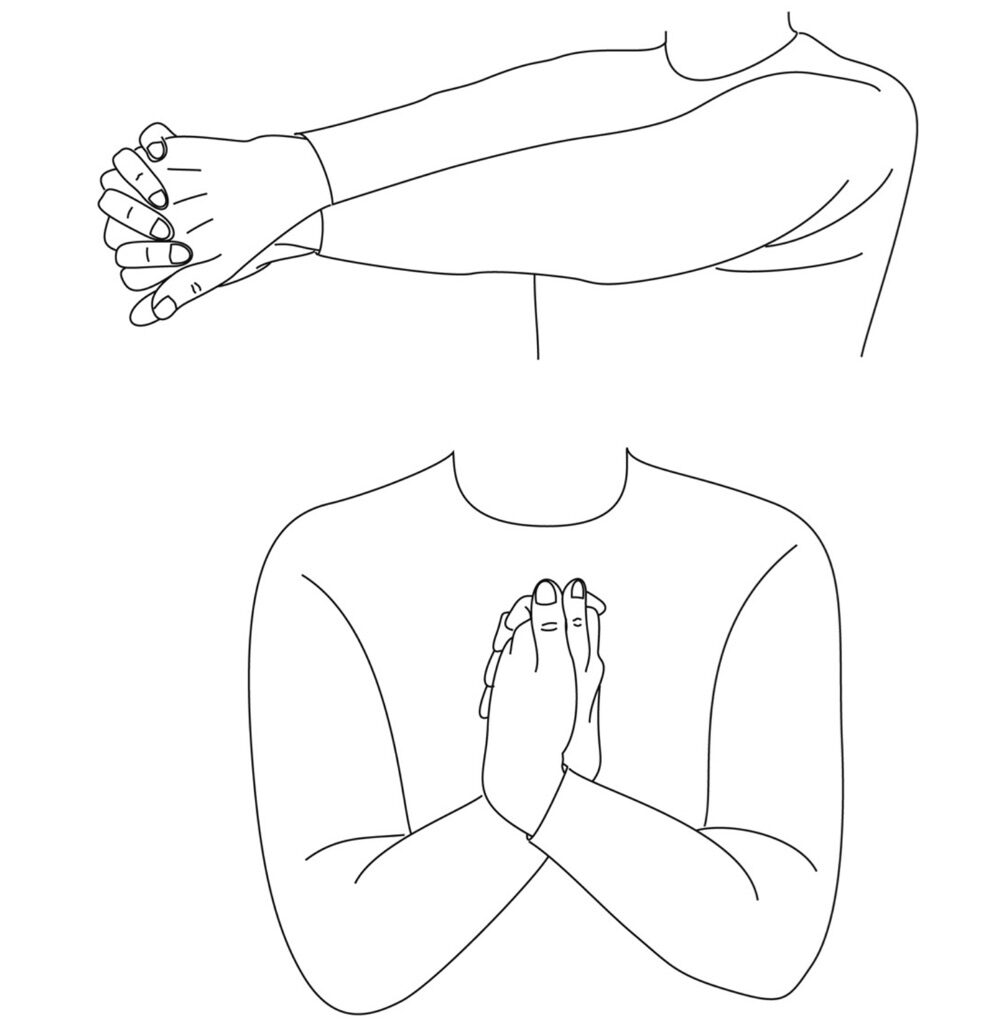 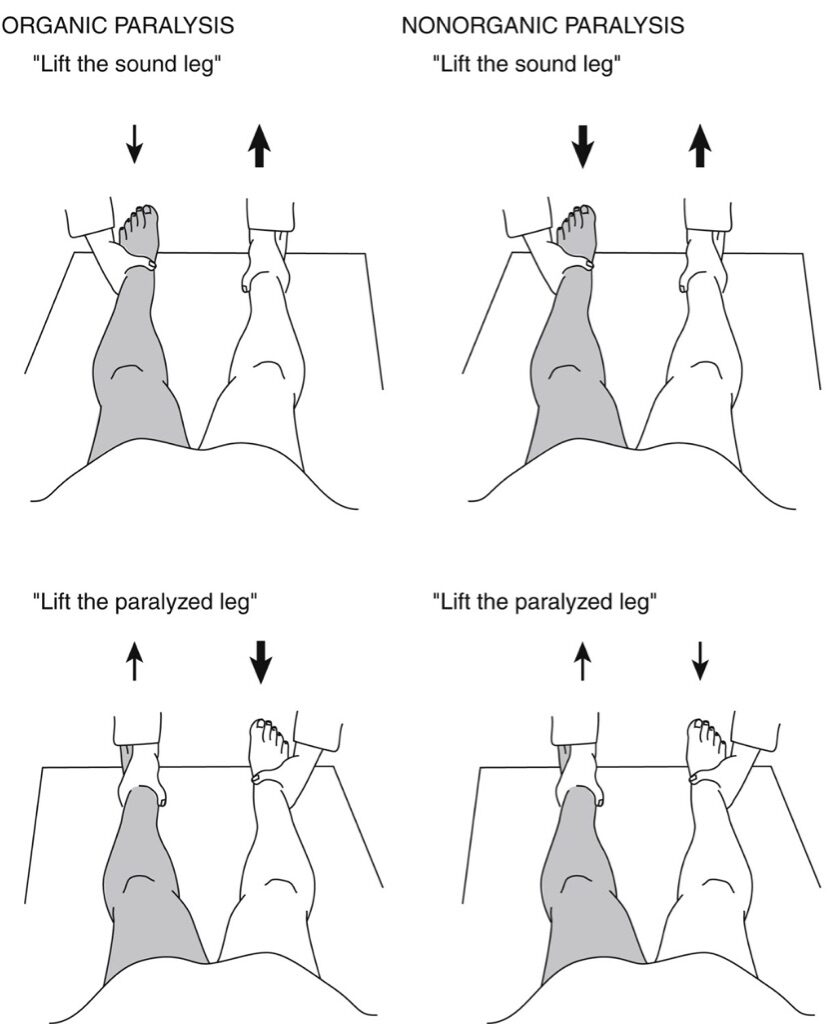 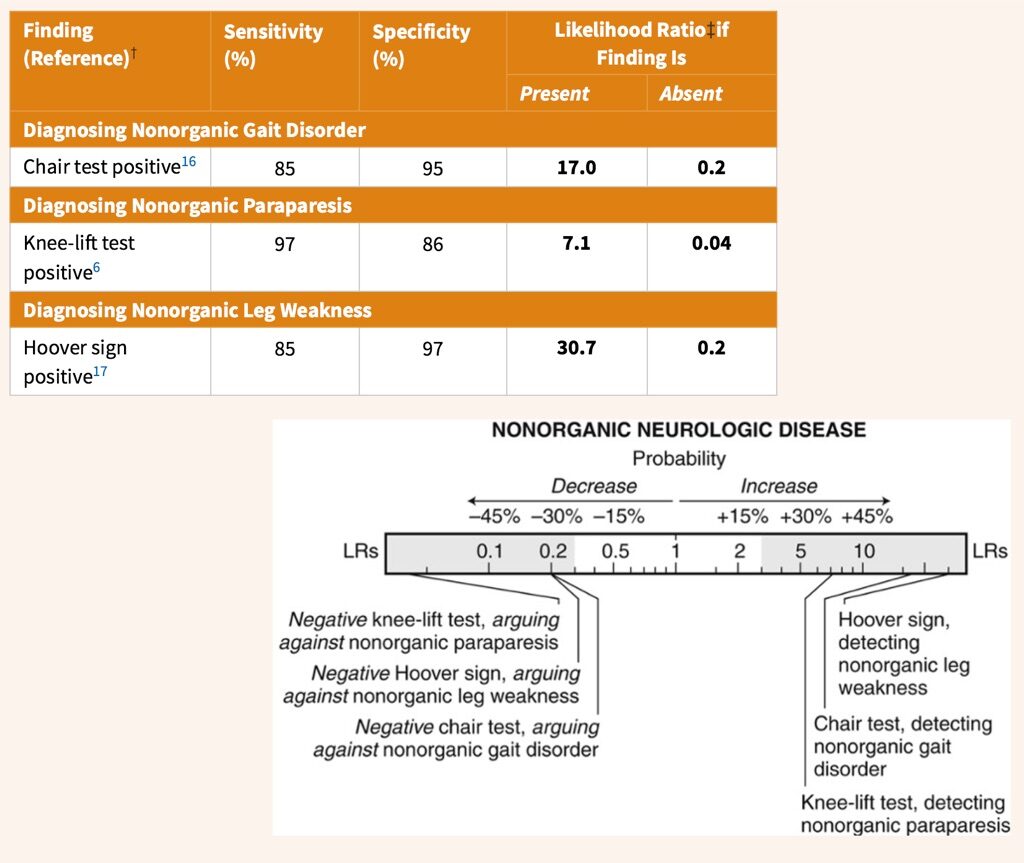